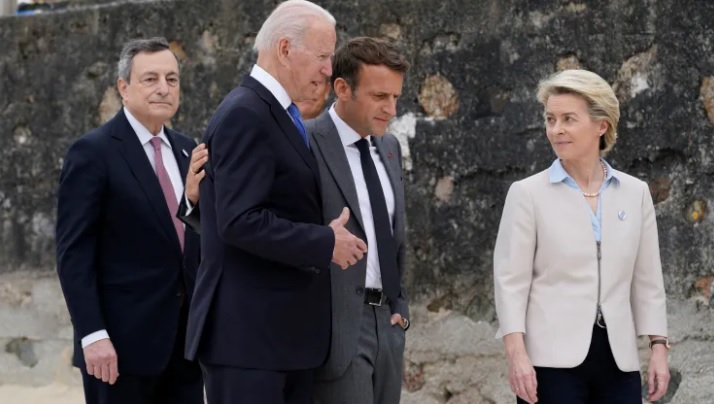 The Science of Where Magazine’s interviews:

– The road to the “new normal” and the role of the G20. The Science of Where meets Priyadarshi Dash. Associate Professor at Research and Information System for Developing Countries (RIS), New Delhi, he has 14 years of experience in policy research on trade, investment, infrastructure and fintech issues in the context of G20, IORA, BIMSTEC and Indo-Pacific

– Inside the ethics of artificial intelligence: for a decentralized approach. The Science of Where Magazine meets James Brusseau, Philosopher, Pace University

– Bruce Jones, Brookings: From the earliest days of his presidential campaign, Joe Biden has made the restoration and defense of democracy a centerpiece of his foreign policy strategy. From just as early, there’s been a debate about the contours of that strategy, and efforts — by his advisors, outside voices, and allies — to interpret Biden’s vision in competing directions. Some of sought to portray this as a remaking of democracy promotion in U.S. foreign policy; others to orient it towards the restoration of American democracy; and still others, to use it as a jumping-off point for rallying allies and partners against China’s growing clout. Biden’s own rhetoric leaves space for all these interpretations. – Can Biden rally the powerful democracies?

– Elizabeth Buchanan, The Strategist: While environmentalists have welcomed the Australian government’s decision to abandon the Davis aerodrome project in Antarctica, China is likely now drafting its own year-round aviation plans for the site. Canberra had already completed much of the required environmental impact work and articulated its ambition to build the continent’s first paved runway to facilitate unfettered aviation access to Antarctica. As a self-appointed Antarctic Treaty System environmental ‘leader’, Australia has now shown that it’s entirely permissible to plan, plot and develop a concrete runway to bolster Antarctic logistical capabilities and access. While Australia ultimately abandoned the plan, a precedent has been set. Any future unease stemming from Chinese action along the same lines, let alone on the same ground, could be painted as a double standard, and Beijing knows it. – Australia’s scrapping of Antarctic aerodrome could pave the runway for China

– Brendan Nicholson, The Strategist: Defence Minister Peter Dutton’s National Press Club address is more easily understood when considered in the context of Australia’s 2020 defence strategic update and the accompanying force structure plan rather than under the fierce spotlight of an upcoming election campaign. – Dutton: War with China would be ‘catastrophic’ and mustn’t be allowed to happen

– Robert Ayson, The Interpreter: The prophecy was delivered in 2014. “It is likely that over the next ten years,” Wellington’s Defence Assessment foretold, “New Zealand will deploy military and other assets in support of a Pacific Islands Forum member in crisis beyond standard disaster response support.”. In 2021 that crisis has come to pass in the current troubles in Solomon Islands. And in accordance with the bilateral security treaty agreed by Honiara and Canberra in 2017, New Zealand’s close ally has responded. The Australian Federal Police and Australian Defence Force are already there. Papua New Guinea has also sent a contingent. Fiji has signalled that some of its personnel are also on the way. – New Zealand: No longer Australia’s Pacific security partner?

– Nicole George, The Interpreter: Amid the disturbing images of mass protests, looting and arson in Honiara last week, local journalist Georgina Kekea shared footage on Twitter of the central market in Honiara. Here, she said, women vendors had been stuck for two days without access to food other than the fruits and vegetables they sell. – Solomon Islands deployment: Australia must meet obligations to women

– Nathan Attrill, Audrey Fritz, The Strategist: The Chinese Communist Party’s foreign influence work is not reduced to one single dedicated organ; instead, state, party and military agencies have fronts that engage in influence operations and are led by CCP’s top leadership. Identifying the leaders responsible for coordinating these systems of organs helps to understand how the influence work is being carried out. – China’s vision to shape global internet governance

– Grigory Ioffe, The Jamestown Foundation: On November 15 and 17, Angela Merkel, the outgoing chancellor of Germany, telephoned Belarusian President Alyaksandr Lukashenka (RBC, November 17). While, on November 14 and 16, Belarus’s Foreign Minister Vladimir Makei had two phone conversations with Josep Borrell, the European Union’s High Representative for Foreign Affairs and Security Policy (Belta, November 14; Mfa.gov.by, November 16). These contacts changed the nature of the border crisis because hitherto no Western leader was expected to talk to Lukashenka or his associates. – Europe Is Talking to Minsk

– Fuad Shahbazov, The Jamestown Foundation: Last September, long-brewing strains between Iran and Azerbaijan reached an unprecedented level, resulting in the deployment of troops and large-scale military drills by both sides. The most immediate trigger was the Azerbaijani authorities’ arrest of two Iranian truck drivers on Armenia’s Goris–Kapan highway (which partially straddles the undelimited portion of the Armenian-Azerbaijani border) for illegally entering the territory of Azerbaijan (Turan, September 15; see EDM, October 6, 27). In addition to Baku’s and Tehran’s rival demonstrative military exercises near the two countries’ shared border, their mutual diplomatic rhetoric became even more aggressive. Inadvertently or not, Baku’s blockade of the road for Iranian trucks also notably spotlighted Iran’s energy exports to Karabakh. – Regional Tensions Could Trigger Energy Deficit in Karabakh

– Edem Dorothy Ossai, Brookings: This policy brief highlights ways that a gender-responsive perspective can be fully incorporated into planning, policy design, and implementation models for education in emergencies (EiE) in Nigeria, so that governments and education stakeholders can ensure that girls, like boys, can continue learning in times of crisis. – Gender-responsive education in emergency in Nigeria

– Makoi Popioco, East Asia Forum: The chaos of the eleventh-hour substitution filing for the 2022 Philippines elections confirmed the disaccord in the Duterte dynasty. But these disagreements may not be permanent as their broader impact on the elections remains to be seen. – Discord threatens the Duterte dynasty

– Vladimir Socor, The Jamestown Foundation: While Kyiv, Berlin and Paris pursue (with varying degrees of intensity, frantically in Kyiv’s case) a high-level “Normandy” meeting as a goal for its own sake, without conditions or a clear agenda, Moscow is setting maximalist conditions for holding such a meeting, and pursues a predetermined agenda and outcome in equally maximalist terms (see Part One in EDM, November 29). – Lavrov’s Leaks: Moscow Embarrasses Berlin and Paris in Negotiations Over Ukraine (Part Two)

– Vladimir Socor, The Jamestown Foundation: Russian diplomacy is testing its rogue-state practices on its Western diplomatic counterparts, and finds them malleable. On November 17, Russian Foreign Minister Sergei Lavrov unilaterally publicized the confidential messages recently exchanged between himself and his German and French counterparts, Heiko Maas and Jean-Yves Le Drian, regarding a possible relaunch of negotiations in the “Normandy” framework (Russia, Germany, France, Ukraine). The relaunch has failed because Moscow set conditions unacceptable in varying degrees to the other participants (totally to Kyiv, partially to Berlin and Paris). – Lavrov’s Leaks: Moscow Embarrasses Berlin and Paris in Negotiations Over Ukraine (Part One)

–  Dolma Tsering, East Asia Forum: Taiwan and the exile Tibetan community share a unique relationship amalgamated by the nexus of China, historical baggage, the relationship between the United States, China and India, and the growing influence of Tibetan Buddhism. The recent high-level meeting between the new Sikyong (political leader) of the Tibetan exile government and Taiwan’s India representative for the first time in a decade is an embodiment of the complex nexus of the relationship. – Is there hope for Taiwan–Tibet relations?

– Paul Globe, The Jamestown Foundation: The extrajudicial murder of a local Pamiri activist by state security police in the mountainous and impoverished Gorno-Badakhshan Autonomous Oblast of Tajikistan has sparked violent protests in that region’s capital, Khorog. The mass demonstrations have so far claimed at least three other lives and left numerous protesters and police officers wounded. Tajikistanis living in Russia and the West have staged rallies of their own, demanding that Dushanbe publicly investigate the Gorno-Badakhshan murder and punish those responsible (KNews.kg, November 27; ASIA-Plus, November 30). – Tajikistan’s Pamir Region Descends Into Chaos

– Pavel K.Baev, The Jamestown Foundation: Crisis is brewing yet again in the intrinsically antagonistic relations between Russia and Ukraine, and President Vladimir Putin seeks to harvest richer political dividends from it than he did half a year ago. The apparent buildup of Russian forces near the Ukrainian border follows much the same pattern; Moscow’s denials of easily detectable parks of military hardware are as categorical as before; and domestic public concerns are similarly focused on the course of the COVID-19 pandemic. One notable difference is the upping by Putin and his courtiers of the aggressiveness of their discourse, which combines predictions of Ukraine’s imminent collapse with threats to confront the North Atlantic Treaty Organization’s (NATO) possible interference. By themselves, harsh words generally yield few tangible results, however; while many Moscow mainstream experts argue that Russia has no plausible rationale for launching a war (Valdaiclub.com, November 25; Nezavisimaya Gazeta, November 22). What, then, underpins the expectations of higher rewards? – Ukraine’s Troubles, Putin’s ‘Red Lines’ and Biden’s Warnings

– Patience Wait, Nextgov: Thanksgiving is past, Christmas is ahead—it must be time for that annual ritual, the threatened government shutdown over the federal budget. A shutdown hits everyone hard, from citizens to businesses, but in particular agencies and contractors. – Getting Ready for the Next Budget Showdown

– Mariam Baksh, Nextgov: The Commerce secretary should consider whether connected software applications have been evaluated for security by a reliable third party when reviewing transactions with U.S. entities, under a new proposal from the department. – Commerce Proposes Third Party Audits as Criteria in Supply Chain Rule for Software

– Tara Copp, Defense One: The Biden administration has approved the Pentagon’s 2021 Global Posture Review, which calls for more rotations and presence in the Indo-Pacific at the cost of military presence in other areas—even as the U.S. watches escalating aggression by Russia against Ukraine and recalibrates how it will counter terror groups and contain Iran in the Middle East. – US Needs Indo-Pacific Force ‘Enhancements,’ Global Posture Review Finds

– Colonel Matthew Strohmeyer, Grace Hwang, Lt. Col. Michelle Macander, Erol Yayboke, Defense One: When the phone rang for Brig. Gen. Mark Weber on Aug. 22, it wasn’t the order that the chief of staff of the Montana Air National Guard was expecting. Instead of taking charge of logistics movements as Hurricane Ida bore down on Louisiana, Weber was summoned to Washington, D.C., to lead a key part of the largest non-combatant evacuation operation in U.S. history. Kabul had fallen to the Taliban one week earlier, and the U.S. government had seen the trickle of refugees out of Afghanistan turn into a flood. Among other things, his experience would illuminate the need for better data sharing between government agencies. – Inside the Data-Driven Operation that Moved Afghan Refugees from Dulles to Safe Havens

– Tran Thi Ngoc Tran, Brookings: Given the profound socioeconomic challenges posed by the COVID-19 pandemic, it is imperative that Vietnam make full use of its human capital. With women making up 50 percent of the population, encouraging entrepreneurship among them is central to the National Strategy on Gender Equality 2021–30, one goal of which is for women-owned businesses to account for 27 percent of all enterprises by 2025 and 30 percent by 2030. Although a number of entrepreneurship training programs for women have been launched, they have not been very effective because they do not adequately recognize the distinct needs and unique challenges of women entrepreneurs. – Demand-driven and gender-responsive policies for promoting entrepreneurship among women in Vietnam