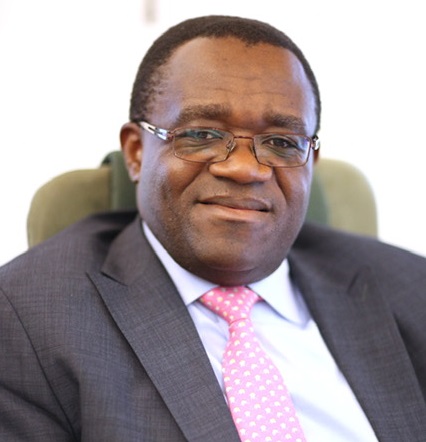 The Science of Where Magazine meets Paul Noumba Um, Regional Director of the World Bank’s Infrastructure Department in the Middle East and North Africa region.

What is the importance of the Pan-Arab electricity market? Is it also a geopolitical investment?

Why is the Pan-Arab electricity market important:

Cross-border electricity trade in the MENA Region is a dramatically underutilized yet very important resource for the countries to meet the growing energy demand in a cost-effective and climate-friendly way. Despite the near-term drop in economic activity due to the COVID-19 crisis, electricity demand in the region is expected to double by 2035. Countries of the MENA Region have substantial imbalances among their power systems, with surplus generation capacity in one country and shortage in another. These imbalances create rich opportunities for electricity trade and mutually beneficial investments, while many duplicative investments planned on a country-by-country basis can be avoided. We estimate that regional integration of the Arab countries’ electricity sectors, including physical infrastructure and markets, can bring them economic benefits of about $200 billion over the next fifteen years. There are also significant climate co-benefits such as lower costs of compliance with the countries’ carbon reduction commitments.

To recall: The promise of electricity trade benefits has inspired the vision for a Pan-Arab Electricity Market (PAEM). With the leadership of the League of Arab States (LAS), the Memorandum of Understanding (MOU) to establish the PAEM was signed in 2017 by 16 Arab countries. For its part, the World Bank responded by launching the Pan-Arab Regional Energy Trade Platform (PA-RETP) Initiative, which has now entered its second phase.

The question about the geopolitical aspects of the PAEM project implies that it may support some regional alliances more than others… The reality is that the PAEM project is a pragmatic effort to create closer cooperation among the countries by uniting them around a common vision of shared economic benefits. Trade among countries, as well as joint investment projects, supports economic and political stability as ties become stronger, reducing fragility and conflict in the region.

Looking from your observatory at the World Bank, how are infrastructure investments evolving in the region? Is there attention to the decisive issue of sustainability?

The COVID-19 crisis has set the clock back on many infrastructure investments. However, the state of infrastructure development in the MENA region can be assessed in comparison with other regions. Access to electricity is still technically available to as many as 96% of the population. However, reliable electricity is falling short, with as many as 20 power outages per month. 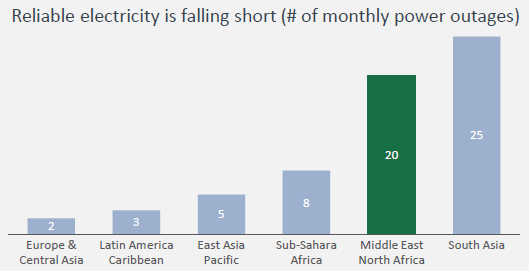 Furthermore, in countries afflicted by civil strife and sectarian conflicts, still unresolved since the Arab Spring, many of the planned investments have been put on hold. In Libya, for example, only 23% of the power generation capacity planned for 2010 – 2016 was actually built.

The issue of sustainability is key to addressing the three main challenges currently facing the global community: economic recovery, delivering on the Sustainable Development Goals, and reducing climate risk as per the Paris Agreement. The pandemic has also the heightened the need to sustainably manage resources to promote adaptation and resilience so we can withstand climate and other shocks. Promoting innovative solutions that are smart and green to mitigate the impact of global warming, protect biodiversity and contribute to transition towards low carbon economy is therefore at the core of our strategy and approach to infrastructure investments in the region. Lastly, we prioritize projects and investments that foster inclusivity, diversity, and empowerment of all, regardless of gender, race, age, etc.

Digital technology is changing the traditional infrastructure paradigm. This is especially true for the transport sector, forcing us to rethink mobility. The electricity sector, too, is set to embrace the digital revolution. The power utility industry is in the middle of a major business transformation, driven by two mega trends – decentralization and de-carbonization of the energy supply chain. Digital technology will transform both the supply and demand of electricity. Large utilities, being on the supply side, will be better-off by embracing the change. Smart network infrastructure based on digital technology will help them improve their operational performance, rather than losing the market to the growing demand-side energy efficiency and distributed generation sectors.

There will also be major shifts in the physical infrastructure in generation and transmission segments. It is widely accepted that the sharp reductions in the costs of renewable energy – particularly, solar PV – have become a global phenomenon pushing fossil fuels out of the market. However, not so many people know that regional electricity market integration can help countries meet their renewable energy targets. This is true for several reasons, and not only because the noted system-cost savings can be appropriated by the treasury and allocated to support renewable energy… The aggregated regional renewable resource profile is typically smoother than that of any individual country. In other words, the greater the number of locations connected, the more likely it is that the sun will be shining and the wind blowing on some parts of the grid, which can then supply power to the others. Also, flexible/firm energy resources in different countries can be pooled to complement renewable output and to provide ancillary services, such as spinning reserves, resulting in a less costly variable renewable energy (VRE) integration. Finally, acting like large batteries, transmission lines built for regional interconnections can also have a role in mitigating the intermittency of VRE.

An important issue for the region is certainly security. How is it linked to the infrastructural issue, to the persistence of conflicts that do not seem to see a solution and to the need for balanced and participatory development?

The revolutionary movements that swept the Arab world a decade ago, as empowering as they were for the Arab citizens seeking to embrace democratic freedoms and never tolerate authoritarian rule, have also triggered political instability and prolonged conflict in some Arab states. Energy infrastructure has taken a major hit in several hot spots in the Arab world, such as Libya, Syria, Iraq, and Yemen. This has forced the development institutions to rethink the electricity sector development models in such countries and find innovative alternatives. In Yemen, for example, service delivery in the power sector has traditionally been public-sector driven and centrally coordinated. The conflict has turned this picture upside down, as the population’s coping mechanisms are decentralized and to a significant extent driven by the private sector. The effort to restore access to electric power is thus focused on strengthening the decentralized service delivery models that have emerged during the conflict.

To conclude, the central idea behind infrastructure development and regional market integration is to turn the vicious circle, where poor access to essential infrastructure services breeds poverty and conflict, into a virtuous cycle where better infrastructure supports better living standards, which in turn reduces the potential for conflict.