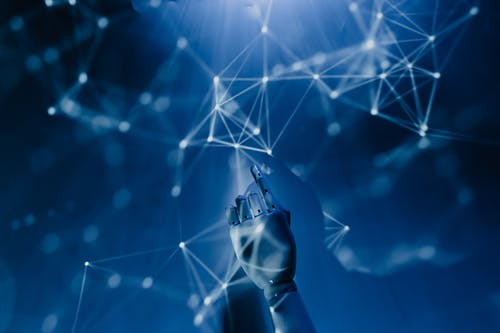 The technology that allowed passengers to ride elevators without an operator was tested and ready for deployment in the 1890s. But it was only after the elevator operators’ strike of 1946—which cost New York City $100 million—that automated elevators started to get installed. It took more than 50 years to persuade people that they were as safe and as convenient as those operated by humans. The promise of radical changes from new technologies has often overshadowed the human factor that, in the end, determines if and when these technologies will be used. Brookings: Michael Lokshin and Nithin Umapathi: AI for social protection: Mind the people

Two of the most powerful men in the world are gathering for face-to-face talks in one of the wealthiest and most influential nations on Earth. The United States, for decades the undisputed global hegemon, is not involved.”.These words appeared in Newsweek hours before Chinese President Xi Jinping and Russian President Vladimir Putin held their first in-person summit in over two years since the COVID-19 pandemic swept through the globe. As anticipated, the February 4 meeting in Beijing, which came as the XXIV Winter Olympic Games prepared to open in the Chinese capital, was followed by a joint statement outlining a plan to deepen bilateral coordination between China and Russia on a range of issues, from foreign policy and defense to trade and economic endeavors. Valdai Discussion Club, Tom O’Connor: The Emergence of the China-Russia Consensus in the Middle East

The start of 2022 has seen Hong Kong’s COVID-19 pandemic firewall well and truly breached. Months had passed with only isolated community cases, but by the end of January there were hundreds of new cases being identified weekly. The rapid spread of COVID-19 caught officials off guard, leading to harsh lockdowns and mass testing. East Asia Forum, Nicholas Thomas: Hong Kong’s cracking zero-COVID strategy

Prime Minister Imran Khan’s upcoming visit to Moscow is an indication of Russia’s long-term commitment to include the whole of Asia among its top foreign policy priorities. Despite negative propaganda by some media outlets, Russia has always stayed modern and effective in its approach to maintaining an independent foreign and defence policy, thereby asserting its role as one of the most important global players, writes Muhammad Athar Javed, Director General of Pakistan House, an Islamabad-based Think Tank of International Affairs. Valdai Discussion Club: Growing Pakistan-Russia Relations: Future of Economic & Strategic Cooperation

On February 18, Belarusian President Alyaksandr Lukashenka visited Moscow and held talks with his Russian counterpart, Vladimir Putin. In a statement to the media, Lukashenka mentioned that military-political issues have taken center stage due to “our Western partners […] scaring the whole world that tomorrow we will attack Ukraine, encircle and destroy it” (President.gov., February 18). Both leaders pointed to Western economic sanctions as instances of unfair competition and a violation of international law. Subsequently, journalist Andrei Kolesnikov of Kommersant ruffled feathers during a brief press-conference. Kolesnikov directed two questions: a playful one to Putin (“Did you sleep well last night, when Russians were scheduled to invade Ukraine?”) and a somewhat cheeky one to Lukashenka (“You recently said that if the West continues to be aggressive, you will rule Belarus forever. What are the current chances for the Belarusian people to lose you?”). Lukashenka replied, “We will now consult the Elder Brother [i.e., Putin] and decide” (YouTube, February 18). The Jamestown Foundation, Grigory Ioffe: Economic Sanctions Deepen Societal Divide in Belarus

On February 22, a day after the Kremlin announced it was recognizing eastern Ukraine’s separatist Donetsk and Luhansk “people’s republics” as “independent,” Berlin declared it would indefinitely halt the certification of the Russian Nord Stream Two natural gas pipeline (Kyiv Post, February 22). And though this move by Germany was potentially one of the most consequential Western responses to Russia’s blatant transgression of international law, it simultaneously revived questions about where Europe will procure sufficient gas, particularly if Moscow were to disrupt westward flows of energy via the Ukrainian pipeline network. One possible alternative raised during the mounting crisis around Ukraine was to boost volumes of Azerbaijani gas delivered via the Southern Gas Corridor. The Jamestown Foundation, Rauf Mammadov: Can the Southern Gas Corridor Save Europe?

CSIS’s Dr. Seth Jones joins the podcast to talk about the latest developments in the Russia-Ukraine crisis, and what options the Biden administration has in addressing the situation. CSIS: Russia Rolls In

On February 14, 2022, two months after the first Summit for Democracy, the U.S. Department of State released written commitments from 56 governments focused on strengthening democracy, combatting corruption, and defending human rights. Now the post-summit Year of Action can begin in earnest. As two of us discussed in a post right after the Summit, for the event to achieve its objectives, civil society, the private sector, and other good governance champions must work with and hold governments accountable for the implementation of concrete, measurable, and meaningful commitments. Brookings, Norman Eisen, Mario Picon, Robin J. Lewis, Renzo Falla, and Lilly Blumenthal: The Summit for Democracy commitments are out—now what?

Silicon Valley’s frustration with the Department of Defense is both well-known and well-founded. All too often, the department provides initial funding to develop a promising technology, only to fail to deliver funding adequate to sustain a scaled capability. This gap between initial and sustained funding is so well-known that it has nickname—the so-called “valley of death”—and it makes the Pentagon an unreliable partner. It has gotten bad enough that when defense and technology officials recently convened for the annual Reagan National Defense Forum in California, investors and technologists made clear that their collective tolerance for the Pentagon’s inability to work effectively with the defense innovation base is nearing the point of no return. Brookings, Melanie W. Sisson: Why can’t the Pentagon buy the cutting-edge technology it needs?