Technologies and risks from China and Russia: what future for liberal democracies? 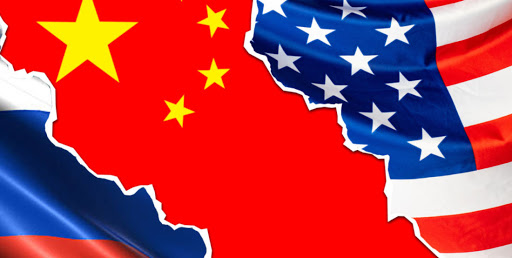 The Science of Where Magazine meets Kevin McCauley who served as senior intelligence officer for the Soviet Union, Russia, China and Taiwan during 31 years in the U.S. government.

In a world characterized by increasingly important technological innovations, how can American leadership, and more generally Western leaderships, evolve with respect to the challenges posed by Asia, China in particular, and by Russia?

The world is in a transition between two very important technological revolutions that are affecting every aspect of society and military affairs; the revolution based on information technologies and the one based on intelligent technologies. Both revolutions pose potential positive and negative influence on the global community.

Information technology revolution has connected the world for decades with communication and information developments. While the availability to access information and communicate globally has many benefits, it has also resulted in many dangerous developments. Information and communication systems and technologies are vulnerable to attack and manipulation that can adversely affect individuals, groups, and governments. Cyber intrusions can disrupt communications, power grids, energy, economic and other sectors. The availability to communicate across the globe is certainly positive, but bad actors also use social platforms and other news sources to spread disinformation in an attempt to influence target audiences. The People’s Republic of China (PRC) is employing information technologies for internal control of its population and supressing ethnic minorities, restricting the free flow of information, and  spreading the Chinese Communist Party’s propaganda. Control over information and social media by big technology companies is resulting in their capability to subtly and not so subtly influence the narrative in societies which can pose a threat to free speech that is a key foundation for democratic countries. Any attack on free speech and attempts to cancel ideas and people with which one disagrees whether by an autocratic state, a business, group or individual represents an existential threat to all democracies. Unfortunately, information technologies enable these attacks on free speech. The promise of the information sphere has become increasingly polluted and weaponized by China, Russia and other bad actors.

The new intelligent technological revolution could pose greater benefits as well as much greater dangers than the information revolution. Related technological developments include big data, cloud computing, quantum computing and communications, deep learning, brain-computer interface and other developments. The People’s Liberation Army (PLA) views these technologies as a potential game changer providing an opportunity for less advanced countries to overtake the world’s advanced militaries. PLA theorists view the development of disruptive technologies as a nonlinear process that can lead to a shock wave causing a technological avalanche. This will lead dramatic changes in industry and economies, society, and the power of countries.  While this new intelligent revolution can bring dramatic benefits to the world, it also raises potential problems. A main concern is the development of intelligent autonomous lethal systems outside of human control.

The worlds democracies including the United States, Europe, Australia, Japan, India and other democratic states need to joint together to oppose the threat from autocratic states led by China and Russia. To quote Benjamin Franklin, “”We must all hang together, or, most assuredly, we shall all hang separately.” China and Russia are attempting to decouple and weaken democratic countries, particularly the US from Europe. The world’s democracies must band together to oppose and respond to the global assault led by China and Russia to influence and impose an authoritarian new world order. Russia and China are redefining language and using information technologies to influence public and elite opinion, conduct espionage, cyber attacks, as well as employ economic, diplomatic, and military coercion to achieve their strategic goals to recreate the world order to their liking.  A recent Estonian intelligence report “International Security and Estonia 2021” correctly observed “Implementing China’s foreign policy doctrine, or creating a “community of common destiny”, will lead to a silenced world dominated by Beijing. Faced with growing confrontation with the West, China’s main goal is to create a division between the United States and Europe.”

PLA theorists are actively assessing new and disruptive technologies and the potential impact on military capabilities. The PLA is still completing mechanization and incorporating information technologies into the force to raise military capabilities. The PLA believes that intelligent technologies can have a significant impact on command and decision making by greatly improving the accuracy and timeliness of battlefield information by more precisely searching, identifying, and transmitting battlefield information to allow the location, identification, and monitoring of key targets, guiding strikes, and assessing the strikes’ effect. The enhanced information sharing, situational awareness, and planning capabilities on the integrated battlefield will compress time and space. The kill chain will be shortened with “cloud” sharing of information and assisted decision-making to plan, launch and guide a strike. The maturity and development of technologies such as big data, cloud computing and quantum computing will speed up the decision-making cycle, as well as improve multi-domain linkage and synchronize multi-dimensional operations. Unmanned operational systems in intelligent warfare will become deeply integrated with the manned system to form an organic symbiosis. The result will be a manned-unmanned operational system. The PLA believes that many factors decide victory or defeat, and that weapons and technology are core factors in warfare. A key factor in intelligent warfare is the autonomy of unmanned systems. However, PLA theorists continue to believe that humans are the decisive factor determining victory or defeat. Intelligent weapons and systems will execute operational intentions and achieve operational objectives determined by humans. Humans will continue to plan, organize, and execute wars, deciding on the command and operational methods employed, assisted by intelligent technology. Factors that could inhibit the PLA’s incorporation of intelligent technologies into the force include stagnant military educational reforms that remain focused on educating officers on information technologies, and slow training reforms to improve combat capabilities. Recent announcements and issuance of regulations by the Central Military Commission appear to be efforts to implement important military education and training reforms. Only time will tell if these recent reform efforts succeed.

The US and Europe are working to incorporate new technologies and operational methods into their militaries. In particular, unmanned systems are being incorporated into Western militaries and incorporated into tactical units to improve reconnaissance, strike and logistics. The PRC is providing significant funding to research and development of emerging and disruptive technologies. Western countries must increase funding in research and development of new technologies to maintain a technological superiority over the authoritarian and anti-democratic regimes of the PRC and Russia. Developing innovative new operational concepts to optimize the employment of these new technologies is a critical component of maintaining a military edge.

The question of a common European military is a decision for the European Union (EU). The creation of an EU military force might not be that important. Years of participating in the North Atlantic Treaty Organization (NATO) has created the capability of the European national militaries to operate together. NATO has conducted operations together in Operation ALLIED FORCE and in Afghanistan for example, in addition to annual NATO exercises. The European militaries certainly appear capable of combined operations. If the EU were to create a common military force, integration would appear relatively easy to achieve.

The last question concerns the great challenge of cybersecurity. I am thinking, in particular, of the growing attacks on critical infrastructures in many countries as well as the suspicions of interference in various electoral processes. What are the prospects for the different Western intelligence systems in the coming years?

Offensive cyber operations by Russia and the PRC only seem to be increasing in sophistication posing an increasing and persistent threat to critical infrastructure as well as the illegal acquisition of economic, proprietary and personnel information. Both countries are actively conducting cyber reconnaissance and intrusions to identify vulnerabilities to exploit at a key moment. The SolarWinds hack is only the most recent example of persistent offensive cyber operations. The incorporation of PRC technologies through their companies represents a threat to the cyber security of democratic nations. PRC businesses are required to work closely with the government and provide information posing a threat of PRC infiltration into foreign information systems.

Democratic nations and their businesses need to work together to seriously confront the cyber threat presented by the PRC and Russia. Improved cyber security and situational awareness of the cyber domain is required to safeguard infrastructure and information.