Strategies/City, development, technology: the perspective of migrants and refugees 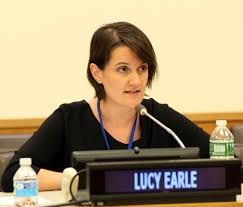 The Science of Where Magazine meets Lucy Earle, a principal researcher in the Human Settlements Research Group at the International Institute for Environment and Development | Linking local priorities and global challenges (iied.org). She leads the Institute’s research and policy engagement on urban crises and urban forced displacement and is principal investigator on a three-year UKAID-funded study comparing the well-being and self-reliance of refugees in camps and urban areas in four countries. She has a PhD from the Development Studies Institute at LSE, and held a post-doctoral fellowship at the African Centre for Cities at the University of Cape Town. Her doctoral and post-doctoral research focused on issues of low-income housing, citizenship and the right to the city, and included extended periods of ethnographic fieldwork in Sao Paulo (Brazil) and Maputo (Mozambique).

The theme of the cities is increasingly important in the change of era we are experiencing. Growing global urbanization confronts us with urban concentration that bring great potential and great risks. In general, what is your opinion about the relationship between citizens of host countries and immigrants ? In particular, what is your research experience in sensitive areas of the South(s) of the world ?
Migrants build cities – in some cases quite literally, as is apparent today in countries across the Middle East, where they are the labour for large-scale construction projects. In other cases, they bring skills, experience and knowledge that contribute to social diversity and growing economies, such as via business they establish. Even though migration and urbanisation have always been intertwined, migrants’ contribution is not always recognised. Right-wing politicians and populists often use them as scapegoats during times of structural economic problems or financial crises. This diverts attention away from their own weaknesses or failings and can lead to xenophobic violence as seen, for example, in South African cities, or the rise in hate crimes in the UK.

Interestingly, examples of these attitudes at national or federal level – in the UK, under Trump’s America or President Bolsonaro’s Brazil – is countered by the enlightened attitude of mayors of large urban areas and other local leaders who have openly welcomed refugees and migrants. Many have joined global networks and alliances to support migration and provide protection to those who have been forcibly displaced by war, disaster or climate change.

It’s important to note that while European governments have expressed alarm at the numbers of people migrating from developing countries. The reality is the vast majority of people displaced by conflict and violence move to neighbouring countries, that may be affected by the same conflict, and/or have high levels of poverty, and will struggle to provide basic services to additional populations.

A decisive element is certainly that, as we read on your IIED’s page, of “the intersections of urbanization, urban poverty and humanitarian crises”. Complexity comes into play and we need a no longer linear approach. Certainly the COVID-19 pandemic aggravates the situation. Can you give us examples of “good practices” regarding the “intersections” mentioned above?

Despite many years of discussions on the link between development and humanitarian action, there is still a large divide between agencies and individuals who operate in emergency contexts to those who work on development projects. Sometimes this divide exists between colleagues working in the same institution, and is reinforced by the ways in which donors categorise and channel their funding. It creates numerous problems on the ground. Emergency assistance is often provided long after the emergency phase of a disaster or displacement event has passed, and measures put in place directly in the aftermath may make the move to longer-term sustainable development extremely difficult. This is particularly critical in urban contexts, where short-term humanitarian interventions may have negative impacts on the built environment. The devastating earthquake in the Haitian capital Port-au-Prince in 2010 is a clear example of this. Agencies responding to the emergency focused on erecting temporary shelters and failed to take note of how local people were rebuilding their homes elsewhere, leading to the growth of informal, underserved and vulnerable new settlements, as highlighted by IIED in its research marking the tenth anniversary of the disaster, Learning from community planning following the Haiti earthquake.

One of the reasons for the gap in the approach between the two disciplines is the history of humanitarian assistance. It developed in response to famines, floods and large-scale refugee movements that took places in often-remote, rural areas. The stock responses of building of camps and the holistic provision of goods and services to affected people make sense in sparsely populated regions with little infrastructure. But starting from scratch and setting up parallel systems is not appropriate in complex, densely populated urban centres where systems and markets already exist to serve their populations. Humanitarian agencies have recognised their limitations, but have been slow to retrain their staff, recruit experts and, critically, provide thought leadership.

Promising practice is still quite limited, but agencies are beginning to consider the merits of an ‘area-based approach’ to humanitarian action in urban areas. Rather than targeting assistance at the individual or household, this approach assesses  the available services in a particular geographical region, municipality or town and identifies the barriers faced by displaced and other low-income people to accessing these services. This type of approach requires advocacy, capacity support and investment at the level of the service provider or system, generally combined with targeted assistance to the most vulnerable women, children and men.

The last question concerns the relationship between the technological factor and the city. If migrations affect the governance of our cities, making them more and more transcultural, technology is the other dynamic that is changing the world and that will place cities in perennial metamorphosis. What is your opinion on the positive role of new technologies in your research and, also, what risks do you see in an innovation that risks dominating us?

There have been some interesting experiments using mobile phone apps to help refugees locate service providers, to record their experiences with these and rate        them for other users. WhatsApp and other channels allow displaced people to connect to family members and to find work and livelihoods. In addition, the increased access to smart phones worldwide provides tools that people can use to record the challenges they fact in everyday life, and get their stories out to a global audience.

However, there is also a need to be cautious. Many displaced people seek refuge in a city as they do not want to be visible to the authorities, fearing persecution, harassment or the prospect of forced return. They may not wish to speak out about their experiences, or have little faith that host governments will take steps to help them. But it is important to remember that the poorest and most marginalised groups will not have access to a mobile phone or be able to pay for the airtime and data required to use one. Within a family unit, women and girls may not have the same access to a phone or the internet that male family members do. And while technology can be a levelling tool, poor literacy can limit its benefits.